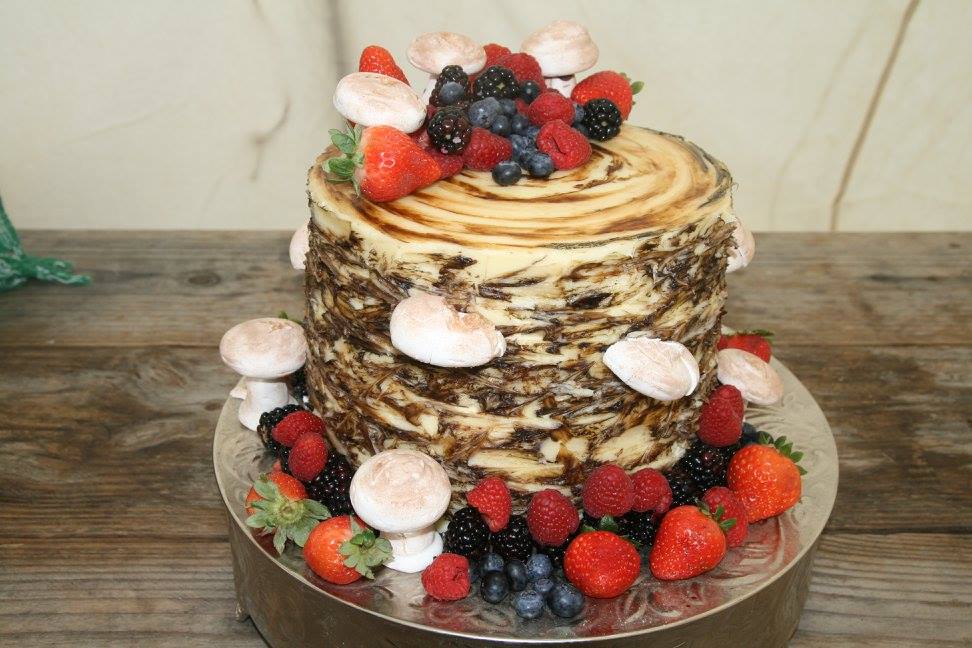 I was inspired to do this cake because my big brother went to a wedding reception and the dessert that they served was a Lemon Ricotta Cream Cake.  He said that it was amazing.  So, being a baking nerd, I had to try to replicate the cake and add my own touches.

I got started by making 4 layers of lemon chiffon cake and I soaked the layers with a lemon simple syrup.  I made lemon curd to be folded into the Lemon Ricotta Cream filling, which I then used to fill between the layers, topped each time with strawberries, raspberries, blackberries, and blueberries.  After filling the cake, I then crumb coated it with a lemon swiss meringue buttercream and chilled the cake for 30 to 40 minutes.

While the cake was chilling, I made meringue mushrooms for some of the decoration.  This process involved whipping egg whites, sugar, and cream of tartar into stiff, shiny peaks and then piping the meringue into round mounds to become the mushroom caps.  Piped verticle lines of meringue became the stems.  Baking the meringue shapes low and slow dried and firmed them.  Once baked, I cut the tip of the stems off in order to give them a flat top on which to attach the two pieces together.  I then painted melted chocolate on the bottom of the caps and attached the stems and let them dry.   When they were dry, I dusted the caps with cocoa powder and cinnamon to give them a realistic look.  I stored them in an air-tight container until needed.

For final assembly, I pulled the cake out of the refrigerator and did the final coat of lemon swiss meringue buttercream.   I wanted to make the cake look like a birch log, so I painted the surface of the icing with brown food coloring on a toothpick until it resembled birch bark.   I then added the remaining berries both around the base and on top of the cake and strategically added my meringue mushrooms for effect.

I was thrilled to learn that people thought my cake looked realistic that they kept trying to touch it!  One guest later told me that he'd never liked lemon cakes but that mine had converted him over completely!